A few weeks ago I was given the opportunity to get up close to some palaeolithic animal bones, and of course, I jumped at the chance.

Some of the bones from the collection had been identified previously, but it was great to handle these bones and to record measurements as they may come in handy when working on future assemblages. Box one of many…

The box of bones featured a range of specimens, the most fascinating for me was a Mammoth vertebra. I don’t mean ‘mammoth’ as in the size, although it is quite large, but ‘Mammoth’ as in the extinct animal. 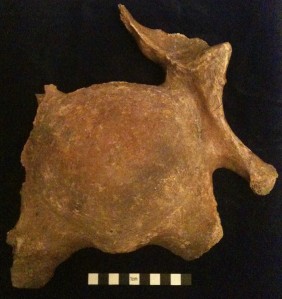 And also a Mammoth tooth.

The Bison tibia was also rather interesting, and very heavy, partly due to fossilisation (the replacement of bone with minerals).

I recorded a fragmented Cattle metapodial, most likely a metacarpal with a Bd of 64.20mm (Bd is the breadth measurement taken from the distal aspect of the bone).

Another interesting bone was a horse cervical vertebra. 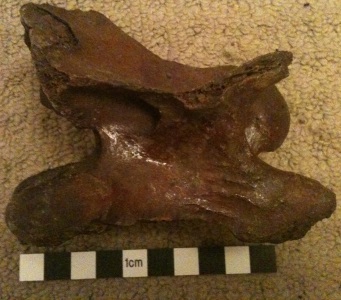 And a horse astragalus. I haven’t seen one of these in the assemblages I’ve worked on so far, so it’s always good to learn to id new elements.

I wonder what’s in box number 2…